An Easter Egg in Google Search

An easter egg has been found in Google search . It was about time that google did something interesting with google search , which even after the recent redesign wasn’t very interesting, But still the minimal look is what we all love about google search .

What is an easter egg anyway , well Wikipedia defines it as

A virtual Easter egg is an intentional hidden message, in-joke or feature in a work such as a computer program, web page, video game, movie, book or crossword.

What it means is that easter egg is just a simple trivial feature that in placed by the creators of the software product to lighten things up .

So now back to google’s easter egg, Imagine Google doing a Barrel roll well you can literally ask google to do it by typing “Do a barrel roll” in the search box , the same effect can also be triggered by typing “z or r twice” .

Then try imagining google having a slight tilt , well neither could I , but you can still see it by searching for “tilt“ or “askew” .

These effects seem to be working in the recent versions of all  major browsers .

Twitter is one of the most visited social networking sites , and one of the factors in their success is the intuitiveness of  the user interface .

In this tutorial We are going to learn how to create a twitter like mouse over effect for retweet , favorite links

To achieve this effect we are going to be using HTML, CSS and jQuery .

And now comes the jQuery Code

Putting it all together we get

To get the full Source code just save the Demo Page as html and open it with a text editor .

As always comments and Suggestions are welcome .
Please Post your comments below

Gmail wasn’t the first web mail interface that I used but it is certainly the best I have ever used. The best web mail interface just got better with a new feature called Preview Pane , which provides a twitter like view for you Gmail page , and greatly improves your productivity .

This feature can be enabled from gmail Labs .

The new and redesigned WebApplinkPage 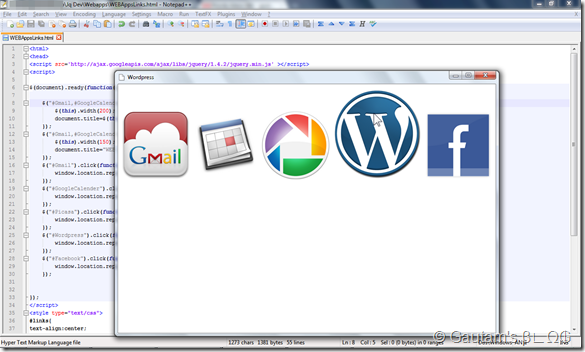 When Google Chrome Rolled out it added the new feature of creating application shortcuts , but you had to have

different shortcuts for different apps like Gmail, Calendar , Facebook … etc . So I created a HTML page using which I can Link to other Apps.

Creating just a HTML Page is very easy ,but I wanted more than Just 4 links that I can click, I needed Animated effects and Icons , so I made it using JQuery .