The most Impressive doodle by Google

This the most amazing use of Web technologies by Google and the best part is that this animation is not FLASH . I wish they would release the Source Code to this .

The Doodle was not an Animated GIF , but instead it was a Large PNG sprite consisting of each individual frame  and some JavaScript and CSS Magic , which makes it Even More Impressive !! 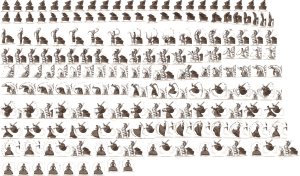 The Animated Doodle was created by Cartoonist Ryan Woodward , and here is the official Video .

I recently attended a 2 Symposiums at some colleges whose name I don’t want to mention, I was a participant in Web Designing Competition in both . In the first one , I really did not plan , I just made a mash up with jQuery , but in the Second one, I put some effort into planning and I designed a really cool website with jQuery UI , I deserved  at least a 2nd  prize , but my tough luck would have it , I didn’t win anything !

I noticed then winners of both the competitions were students who created something very basic with Flash , My creating was comparatively complex and had more features , but Students who did Flash got real preference.

I set out to Solve this , I Applied to the program that adobe was offering Flex Builder 4 for free to students ,and I got a reply with a free serial Key .

Then I set out to Learn Flash under flex SDK 4.1.

This was a bit more difficult than I Thought , but I Finally managed to Understand MxML and Action Script .

Armed with this Knowledge I made a Simple Calculator (http://j.mp/ewBMmM )

Being a guy who Likes Open Source stuff , I have made the source code available for free. 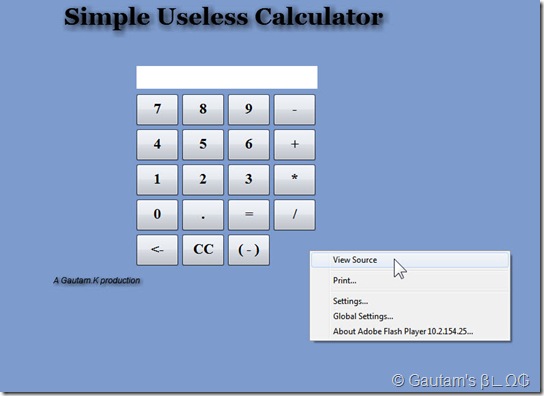 In view source mode you get to see the source code and also to download a Zip version .

A nice Feature that is easily built with Flex Builder .

I was surprised to Learn How simple Action Script really is .

Action Script ,JavaScript ,Java , C++ … all these languages are like cousins , You Know one , the other is really similar .

MxML on the other hand is pure XML , but its very easy with Autocomplete Enabled.

So the First Step of My Flash Learning Process is officially complete.

Now I can officially add this to my Resume` .